This is book 2 of the Broken Love Series, read my first review here:

Well it didn’t even review book one before diving straight into this bad boy!

What an amazing conclusion to Kieran and Lakes story. This is an emotional rollercoaster and absolutely worth every second of the craziness!

We meet some new characters while some others fall to the wayside. There is plenty set up for subsequent books and loads of people I’d like to see more of!

I loved that Lake grew a pair for this book! No longer was she going to allow herself to be pushed around- go on girl! It didn’t always work in her favour but she did it.

I often found myself cursing them both; if she just or if he just, why can’t they just … this story definately kept the pages turning!

A fantastic point to close their story and look to another couple for their Broken Love!

What happens when she’s had enough?

Lake Monroe has given in to her childhood tormentor too many times. She knows it, he knows it, and even their enemies know it. When he returned after being found guilty of a crime he didn’t commit—a crime he thought she set him up for, he returned darker than ever, demanding her body and her submission. To survive him, she knew she had to give in to fear once more or suffer the deadly consequences…

But Lake experienced what it was like to submit to the dark and demanding boy who invaded her dreams. Now she’ll experience what it’s like to fight him.

What happens when he wants more?

But when Keiran conquered her body and tasted her submission, he found a new addiction instead—one he has no intentions of giving up.

As secrets unfold,
Identities are revealed,
Danger closes in,
And they both discover what it really means to fear… 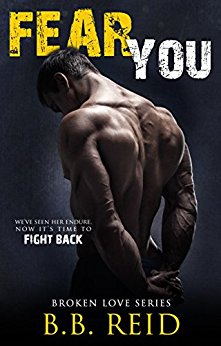