This is a standalone book.

I haven’t read anything by Molly before, she is one of the authors coming to FBBF17 and was kind enough to giveaway a copy of her book, that I won.

From the cover I guessed (read assumed) that this was a gentler story than I usually read and would be more romance based with less action content, but boy was I wrong!

Connell is cold and closed off to the world. He has been hurt in the past and he is definitely not interested in repeating those mistakes! I get where he is coming from, and I completely love the character that he unfolds to be.

Sadie is a strong, independent woman who knows what she wants and is not afraid to work for it. She has worked long and hard to get respect with the locals as well as in her profession. That familiarity helps her out in more than one way throughout this ordeal.

There is a great story running though here with some fabulous secondary characters. I really enjoyed the way the story unfolded and the twists and turns within. It would have been nice to see a little of Sadie’s past, I know who she is now and what she stands for but what made her that way, how did she get to where she is. We know a lot about Connell and how and why he has come to be where he is but we don’t really know much about Sadie’s history.

That being said, I read the book in one sitting. It absolutely captivated my imagination and drew me in to this amazing under water world. I really enjoyed the story and am looking forward to reading more from Molly E Lee before the signing next year 🙂

Sadie Jenkins’ most recent site of preservation is a sunken WWII cargo ship off the coast of the Bahamas. When a giant corporation threatens to blow it up to make way for an underwater gas pipeline, Sadie is forced to prove to the Head of Government the importance and value of her site. And when assistance comes from a bad-boy welder who works for the corporation, she ends up battling not only the people trying to demolish her site, but her heart as well—because its latched on to the one man who can save her ship or destroy it. Connell Murphey is the best underwater welder this side of the Atlantic and thrives when the stakes are highest. When Slade Industries offers him a dangerous gig with a big pay off, he can’t wait to sign on. When a local marine preservationist gives Slade trouble—her site’s protection would cost him millions to go around it instead of through it—Slade offers Connell the deal of a lifetime: twelve million has his name on it if he gets close to Sadie and testifies to the Head of Government that her site isn’t worth saving. Should be easy money. That is, until he meets Sadie. She’s a force to be reckoned with and the only woman who has ever been able to not only keep pace with him on a dive but completely surpass him on every level. She’s smart, sexy, and their chemistry is off the charts. The more he gets to know her, the harder he falls but he’s already in too deep with the deal he made with Slade. When the time comes, will he be able to turn down the money and choose the girl of his dreams, or will too many lies kill his only chance at forever? 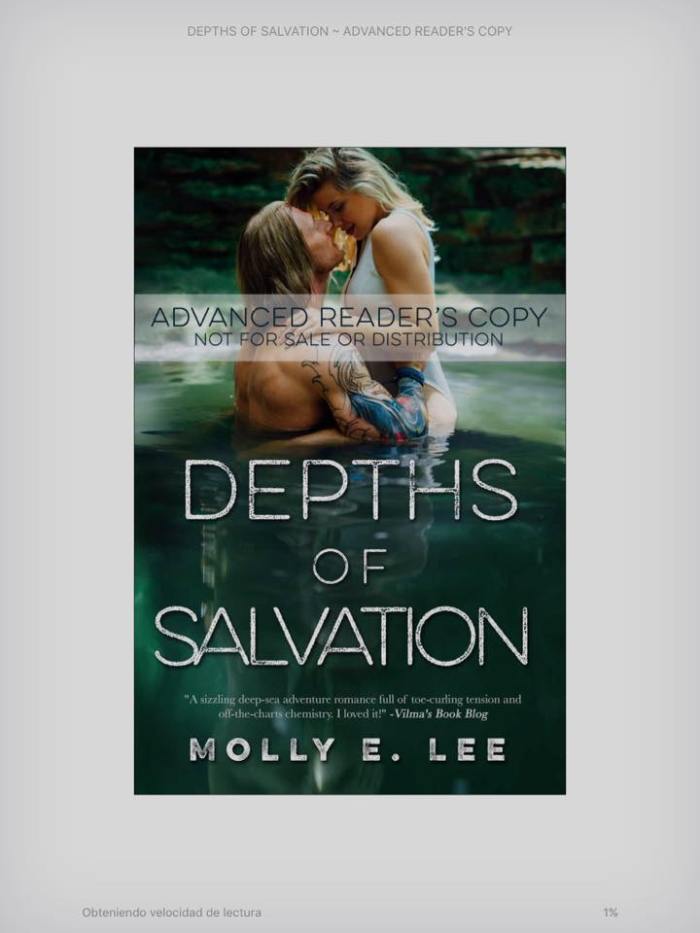 3 thoughts on “Depths of Salvation Review”