This is book 1 in the Valetti Crime Family series

I really enjoyed this book. It was a great introduction to the family, how they interact and the world they live in.

Dom is a hard, dominant man. He lives on the wrong side of the law and makes no apologies for it. He doesn’t give second chances and he doesn’t take any sh*t, you get one chance and that is your lot. Until, he meets her! Suddenly our controlling, use em and lose em man is chasing a woman!

Becca is the soft to Dom’s hard. Thrust unknowingly into this world, she will have to sink or swim and use everything she has to her advantage. When through her interactions with Dom she becomes a target she shows an enviable inner strength.

There is a great chemistry between this couple, one that keeps you coming back for more. There is plenty of action throughout the story. A great, easy read leading you through into the next story.

Dominic Valetti is only interested in two things: getting paid and getting laid.

He’s a bookie for the Valetti crime family, and he knows his sh*t. Dom’s busy doing business, no time to dabble in social niceties. The women that chase after him wanting more than a dirty, hard f*ck are only gonna get their hearts broken.

That is, until Becca stumbles into his office to pay off her ex’s debt. A hot brunette who’s just as guarded as he is and has a body made for sin… and for him. They’re not meant to be together. A woman like her shouldn’t be with a man like him. He’s mobbed up; she’s a good girl who deserves better.

When they push their boundaries and cave to temptation, they both forget about the danger. And that’s a mistake a man like Dom can’t afford. Will Dirty Dom risk it all to keep Becca safe, or will he live up to his name? 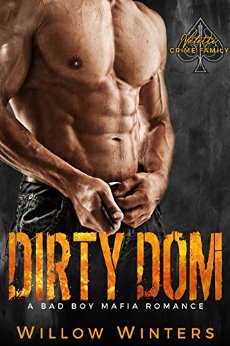